On the first day of the Hajj (the 7th day of the 12th month in other words, Dhu al-Hijjah), the pilgrims perform their first Tawaf, which involves all of the pilgrims entering The Sacred Mosque (Masjid Al Haram) and walking seven times counter-clockwise around the Ka’ba, kissing the Black Stone (Hajr Al Aswad) on each circuit. If kissing the stone is not possible because of the crowds, they may simply point towards the Stone on each circuit with their right hand. In each complete circuit a pilgrim says “In the name of God, God is Great, God is Great, God is Great and praise be to God” (Bism Allah Allahu Akbar, Allahu Akbar, Allahu Akbar wa lil Lahi Alhamd) with 7 circuits constituting a complete tawaf. The place where pilgrims walk is known as “Mutaaf”. Only the first three Shouts are compulsory, but almost all perform it seven times.

The tawaf is normally performed all at once. Eating is not permitted but the drinking of water is allowed because of the risk of dehydration. Men are encouraged to perform the first three circuits at a hurried pace, followed by four times, more closely, at a leisurely pace.

After the completion of Tawaf, all the pilgrims have to offer two Rakaat prayers at the Place of Abraham (Muqaam Ibrahim), a site inside the mosque that is near the Kaaba. However, again because of large crowds during the days of Hajj, they may instead pray anywhere in the mosque. Although the circuits around the Kaaba are traditionally done on the groundlevel, Tawaf is now also performed on the first floor and roof of the mosque because of the large crowd.

After Tawaf on the same day , the pilgrims perform sa`i, running or walking seven times between the hills of Safa and Marwah. This is a re-enactment of the frantic search for water for her son Ismael by Abraham’s wife Hagar. As she searched, the Zamzam Well was revealed to her by an angel, who hit the ground with his heel (or brushed the ground with the tip of his wing), upon which the water of the Zamzam started gushing from the ground. The back and forth circuit of the pilgrims used to be in the open air, but is now entirely enclosed by the Masjid al-Haram mosque, and can be accessed via air-conditioned tunnels. Pilgrims are advised to walk the circuit, though two green pillars mark a short section of the path where they are allowed to run. There is also an internal “express lane” for the disabled. The safety procedures are in place because previous incidents in this ritual have resulted in stampedes which caused the deaths of hundreds of people.

As part of this ritual the pilgrims also drink water from the Zamzam Well, which is made available in coolers throughout the Mosque. After the visit to the mosque on this day of the Hajj, the pilgrims then return to their tents. 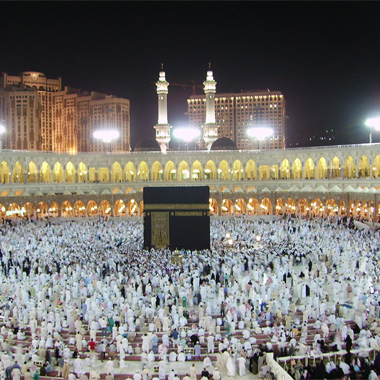