The Hajj is based on a pilgrimage that was ancient even in the time of Muhammad in the 7th Century. According to Hadith, elements of the Hajj trace back to the time of Abraham (Ibrahim), around 2000 BC. It is believed that the Prophet Ibrahim was ordered by God (Allah) to leave his wife Hajra and his infant son Ismael alone in the desert. While he was gone, the child became thirsty, and Hajra ran back and forth seven times searching for water for her son. The baby cried and hit the ground with his foot (some versions of the story say that an angel scraped his foot or the tip of his wing along the ground), and water miraculously sprang forth. This source of water is today called the Well of Zamzam. Nawal El Saadawi, an Egyptian Muslim writer has said that elements of the Hajj, such as kissing the black stone had pre-Islamic, pagan roots.

Prior to Muhammad’s era, each year tribes from all around the Arabian peninsula would converge on Mecca, as part of the pilgrimage. The exact faith of the tribes was not important at that time, and Christian Arabs were as likely to make the pilgrimage as the pagans. Muslim historians refer to the time before Muhammad as al-Jahiliyah, the “Days of Ignorance”, during which the Kaaba contained hundreds of idols – totems of each of the tribes of the Arabian peninsula, with idols of pagan gods such as Hubal, al-Lat, Uzza and Manat, and also some representing Jesus, and Mary.

Muhammad was known to regularly perform the Umrah, even before he began receiving revelations. Historically, Muslims would gather at various meeting points in other great cities, and then proceed en masse towards Mecca, in groups that could comprise tens of thousands of pilgrims. Two of the most famous meeting points were in Cairo and Damascus. In Cairo, the Sultan would stand atop a platform of the famous gate Bab Zuwayla, to officially watch the beginning of the annual pilgrimage.

In 632 AD, when Muhammad led his followers from Medina to Mecca, it was the first Hajj to be performed by Muslims alone, and the only Hajj ever performed by Muhammad. He cleansed the Kaaba, removed all the idols, and re-ordained the building as the house of God. It was from this point that the Hajj became one of the Five Pillars of Islam. 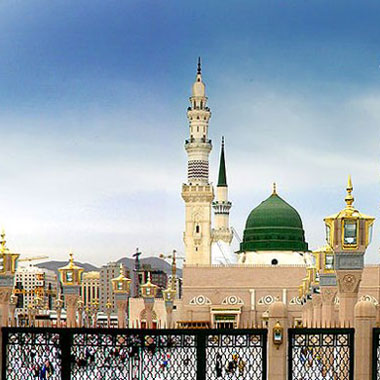